South Korea, country in East Asia. It occupies the southern portion of the Korean peninsula. The country is bordered by the Democratic People’s Republic of Korea (North Korea) to the north, the East Sea (Sea of Japan) to the east, the East China Sea to the south, and the Yellow Sea to the west; to the southeast it is separated from the Japanese island of Tsushima by the Korea Strait. South Korea makes up about 45 percent of the peninsula’s land area. The capital is Seoul (Soul).South Korea faces North Korea across a demilitarized zone (DMZ) 2.5 miles (4 km) wide that was established by the terms of the 1953 armistice that ended fighting in the Korean War (1950–53). The DMZ, which runs for about 150 miles (240 km), constitutes the 1953 military cease-fire line and roughly follows latitude 38° N (the 38th parallel) from the mouth of the Han River on the west coast of the Korean peninsula to a little south of the North Korean town of Kosŏng on the east coast.

Geologically, South Korea consists in large part of Precambrian rocks (i.e., more than about 540 million years old) such as granite and gneiss. The country is largely mountainous, with small valleys and narrow coastal plains. The T’aebaek Mountains run in roughly a north-south direction along the eastern coastline and northward into North Korea, forming the country’s drainage divide. From them several mountain ranges branch off with a northeast-southwest orientation. The most important of these are the Sobaek Mountains, which undulate in a long S-shape across the peninsula. None of South Korea’s mountains are very high: the T’aebaek Mountains reach an elevation of 5,604 feet (1,708 metres) at Mount Sŏrak in the northeast, and the Sobaek Mountains reach 6,283 feet (1,915 metres) at Mount Chiri. The highest peak in South Korea, the extinct volcano Mount Halla on Cheju Island, is 6,398 feet (1,950 metres) above sea level.

Archaeological finds of prehistoric toolmaking on the Korean Peninsula date back to 70,000 BC, and the first pottery is found around 8000 BC. Neolithic era comb-pattern pottery culture peaked around 3,500-2,000BC.Legend has it that Korea began with the founding of Gojoseon (also called Ancient Chosun) by the legendary Dangun in 2333 BC. Archaeological and contemporaneous written records of Gojoseon as a kingdom date back to around 7th-4th century BC, functioning as a loose confederacy of smaller polities. The western half fell to the encroaching Han Dynasty of China and its territories were governed by remote outposts, but was a tenuous foothold and the natives of the peninsula and Manchuria soon reclaimed the territory, namely the Three Kingdoms of Korea, Goguryeo, Silla, and Baekje. Despite repeated attempts by China, namely the Sui Dynasty and later the Tang Dynasty, to conquer the Korean Peninsula, northern-based Goguryeo managed to repel them. Eventually, Goguryeo fell to a Silla-Tang alliance, which had earlier defeated Baekje. This “unified” Korea began under the Silla dynasty, however true political and cultural unification would not be be achieved until the Goryeo dynasty, after absorbing Goguryeo remnants (Balhae) in 926. Even though Tang later invaded, Silla forces managed to drive them out, thus maintaining Korea’s independence.

Here is the complete list of South Korea Provinces and Cities wise tourism and packages. 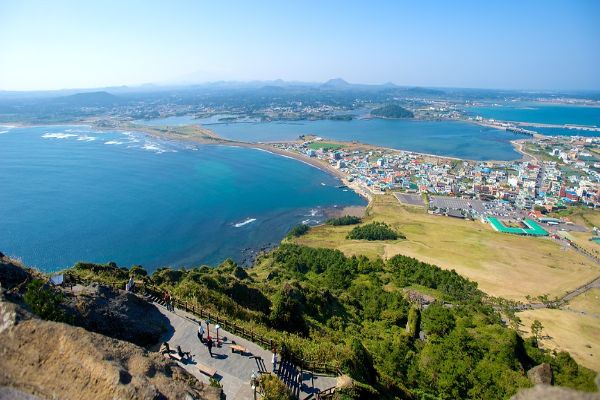